Killifish – The name killifish is derived from the Dutch word “kilde,” meaning small creek or puddle. Most killies are small fish, averaging 1-2 inches long. Killifish provide food for wading birds, aerial birds, and some ducks. Fishers also use them as bait while fishing. Killifish feed primarily on aquatic arthropods such as insect (mosquito) larvae, aquatic crustacean, and worms. 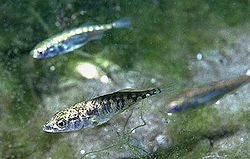 Stickleback – These small 3-inch torpedo-shaped fish, which are closely related to pipefish and seahorses, have no scales (though some species have bony armor plates), and are characterized by isolated spines in their dorsal fins. Sticklebacks feed on small animals such as insects, crustaceans, and fish larvae. Sticklebacks can be found in both ocean-water and freshwater environments.

Mummichog – The mummichog is a type of killifish that is capable of tolerating highly variable salinity and temperatures, and is found in estuaries and saltmarshes, as well as less salty waters. Mummichogs spawn on new and full moons in the spring and summer. Mummichog eggs are laid near the high tide mark and can tolerate long-term exposure to air. The eggs are used in teaching embryology, because it is possible to see the eyes and the beating heart and follow the different stages of ontogenesis.

Atlantic Silverside – This small fish is a common subject of scientific research due to its sensitivity to environmental changes. Silversides prefers brackish water where rivers and streams meet the ocean and they are typically found a few feet away from the water’s edge, swimming in the underwater grasses that help protect them from predators. During winter, most silversides swim to deeper water to avoid cold temperature.

Many bird species have been noted to occur at the Goldthwait Marsh and Riverhead Beach area and many more could potentially occur there. Wading birds, ducks, diving birds, gulls, terns, and shorebirds make up the dominant groups. To a much lesser degree, passerines, such as warblers, wrens, and sparrows, may stop over and rest and feed at the upland portion of the beach among the shrubs and upland weeds. The following table lists the species of birds that have been sited and their main source of food.

Raccoons (Procyon lotor), which often forage along coastlines, are noted in Marblehead at night, as well as striped skunks (Mephitis mephitis) and opposums (Didelphis marsupialis). All of these animals are common throughout the area and at Riverhead Beach and likely feed upon crabs and other crustacea, various mollusks, sea urchins, mice, and whatever other food they may scavenge. Brown rats (Rattus norvegicus) and black rats (Rattus rattus) also inhabit the area. The Goldthwait Reservation also provides suitable habitat for muskrats (Ondatra zibethicus), Easter cottontails (Sylvilagus floridanus), and various species of mice, voles and shrews. Red fox (Vulpes fulva) have been noted in the area. Though no siting of the Mink (Mustela vsison) or the long-tailed weasels (Mustela frenota) have been noted, these animals are known to forage along beaches at night and therefore it is not unrealistic to assume that these species may occur in the area. Harbor seals (Phoca Vitulina), which are common along the coastline of the north shore during the winter months, may also occur along Riverhead Beach. It is unlikely that the area is an important staging area however, due to its location at the inner point of the Harbor.

Several types of marsh bird populations are in serious decline in Northeastern Massachusetts. Please refer to the Natural Heritage and Endangered Species Program website to report sightings of declining or endangered species.